Just as Mercury’s Cougar borrowed its mechanical components from the Ford Mustang, so the Challenger shared the driveline of the Plymouth Barracuda. Like the Cougar, it was a little larger and a few pounds heavier than its corporate sibling. It was built on a 110-inch wheelbase, two inches longer than the Plymouth version; overall length was greater by four and a half inches, and the Dodge variant was the wider of the two by nearly an inch and a half. Dodge advertisements made the most of that fact, noting that “none of the other sporty cars can match the Challenger for…roominess.”

One has to make allowance for a certain amount of puffery in interpreting any advertising claims. But the Challenger did, in fact, offer unusually comfortable accommodations for a car of this type. Front leg room was downright generous, and even the back seat wasn’t quite as cramped as some of the competition. Dodge claimed that the eight-cubic-foot trunk could hold “three lady’s train cases, five lady’s overnight bags, a man’s overnight bag, and a set of golf clubs.” No doubt the shoehorn was optional.

Not unexpectedly, the Challenger cost a little more than the Barracuda, but the difference was only $87.00. Evidently the public found the premium to be money well spent, for during its initial year the sporty little Dodge outsold its Plymouth counterpart by a three-to-two margin, and it maintained its lead as long as the two cars remained in production. (It is probable, however, that some of the Challenger’s sales came at the expense of the larger Dodge Charger, whose 1970 volume dropped sharply from its 1969 figure.)

Since the Barracuda, then undergoing its second major restyling, had been on the market since 1964, it would be reasonable to assume that the Challenger was derived from its corporate sibling. In fact, however, exactly the opposite appears to have been the case. According to Tom Quadrini, writing in Classic Chrysler Quarterly, “When Chrysler designed the E-body Challenger and Barracuda, they did not design two cars from scratch. The Dodge Challenger was the car they designed and did all the research and development on. The Plymouth Barracuda was based on everything that came from the development of the Challenger.”

Components, scrounged from the Corporation’s parts bin, included one of the widest arrays of engines ever offered to the public: nine of them initially, ranging from the sturdy but unspectacular 145-horsepower Slant Six to the legendary Hemi. And as if that weren’t enough, six months later, when the T/A, or Trans-Am option was introduced, there was yet another engine. But we’ll get to that, presently.

The competition was well entrenched by the time the Challenger made its debut, but in at least one respect Dodge was fortunate. Chevrolet was due to introduce its second-generation Camaro for the 1970 season, an event calculated to draw a great deal of attention, presumably at the Challenger’s expense. But as luck would have it, the Camaro didn’t hit the showrooms until mid-way in the model year, which gave the little Dodge time to have its place in the sun.

Dodge made the most of the situation. First year sales of the Challenger came to 83,032 units, surpassing even the best season in the Barracuda’s entire 11-year history. Sales dropped off sharply thereafter, but of course the same was true of the Mustang. The simple truth is that the Challenger “came too late to the ball,” for the pony car market was rapidly waning.

We have spoken of the Challenger in the singular. Actually, there were six of them: three body styles in each of two series. The volume line was the base hardtop coupe, which accounted for 64.2 percent of the Challenger’s first-year production. Rounding out the base series were the SE (Special Edition) hardtop, of which we’ll have more to say in a moment, and the convertible. The same three styles were also offered in the high-performance R/T (Road and Track) series; and once again the standard hardtop coupe was the top seller, accounting in this instance for 16.9 percent of the total Challenger output.

Standard powerplants for the base series were the Slant Six and the venerable 318 V-8. But that was just for starts. Available at extra cost were a four-barrel, 340-c.i.d. small-block V-8, developing 275 horsepower; or a pair of 383-c.i.d. big-blocks, rated at 290 horsepower with the two-barrel carburetor, or 330 horsepower with the four-barrel pot and a somewhat higher compression ratio.

The R/T series came standard with a 335-horsepower, four-barrel version of the 383 engine, but once again there were options. There was a four-barrel, 440-c.i.d. V-8 that developed 375 horsepower; or the same engine could be had with triple two-barrel carbure-tion, rated at a blistering 390 bhp. And then, for anyone with an extra $871 to spare, there was the race-bred Hemi, advertised — perhaps conservatively — at 425 horsepower.

Either a fully synchronized four-speed manual transmission or Chrysler’s excellent TorqueFlite automatic was mandatory with any of the high-performance engines, while a three-speed manual was supplied as standard with the less vigorous powerplants. The TorqueFlite, as fitted to the Challenger, came with a “slap-stick” shift gate, permitting positive stops at “2” and “D,” thus eliminating the danger of “overshoot” when shifting out of first gear. Also available for the performance-minded, at moderate extra cost, were a Sure-Grip differential, heavy-duty suspension, tachometer, “performance” instrument panel and either front disc/rear drum or oversized drum brakes.

But for the Muscle Car crowd, the hot ticket was the R/T series, priced $313 higher than the base Challenger with 318 power. Standard equipment for this series included the 335-horsepower, 383-c.i.d. engine, rallye suspension with sway bar, heavy duty drum brakes, and F78/14 fiberglass belted tires in lieu of the standard E78/14 skins.

It was a potent machine. Motor Trend, road-testing a Challenger R/T with TorqueFlite, did the standing quarter-mile in 15.7 seconds, reaching 90 mph at the end of the run. Not bad, but the numbers could have been better. The car was an early-production unit, and evidently it had not been properly prepared or broken in. The test crew complained that the transmission was not functioning as it should, and in any case the 3.23:1 axle ratio was too mild for optimum performance. Testing a similar car, Union Oil and the NHRA covered the quarter-mile in 14.39 seconds, topping out at 98.98 mph — probably a more accurate indication of the Challenger R/T’s potential.

Following its extended test of the 383-powered car, Motor Trend was permitted to spend some time with another Challenger, this one powered by the 340-c.i.d., 275-horsepower small-block engine. This one, which came with the four-speed manual transmission and 3.55:1 cogs, was evidently in better tune than the first car, for it did the standing quarter-mile in just 14.9 seconds, at 91 mph. And in terms of passing times, the small-block car was faster by 0.6 seconds from 40 to 60, 0.8 seconds from 50 to 70 than the 383-powered unit.

The Challenger’s styling drew enthusiastic reviews. It followed the familiar long hood/short deck theme, with rounded sides that gave it a slippery shape. No fewer than 18 color choices were offered. Five of these were extra cost, high-impact finishes bearing such “Laugh-In”-style names as “Plum Crazy,” “Go-Mango” and “SubLime.” Quad headlamps were buried in the recessed grille, while concealed windshield wipers and a steeply raked windshield enhanced the air foil design. Stop, tail, back-up and turn signal lights were hidden behind a single, full-width lens.

The buyer who wanted something more than the standard Challenger could specify, in either the base or R/T series, the Special Edition hardtop. This “little limousine” came with a formal roofline, including a smaller-than-standard backlight. It had premium quality, leather-faced seats; and overhead there was a consolette with warning lights for “door ajar,” “seat belts” and “low fuel.” For this, the buyer paid an extra $232, which sounds like a reasonably good value, but sales of the SE, in both base and R/T guise, were disappointing.

The model that strikes us as the most desirable Challenger of them all was introduced during April 1970. This was the T/A, or Trans Am, a race-bred, high-performance machine. In an advance publicity release, Dodge Public Relations offered the following description:
“The engine will be a special 340-cubic-inch powerplant with three two-barrel carburetion, modified block, special cylinder heads and a modified valve train. 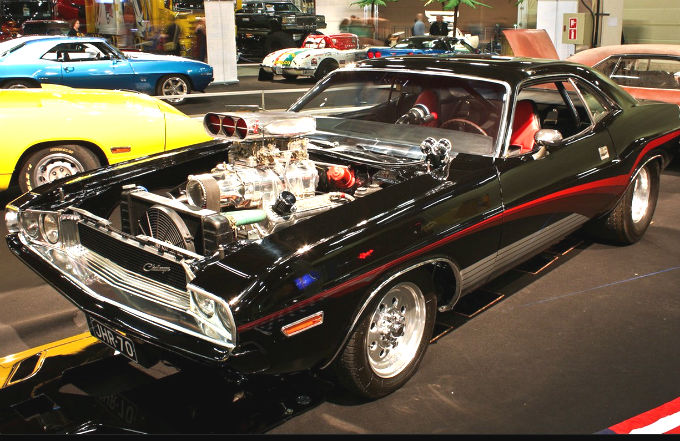 “The car will have a special side exhaust, low-restriction dual exhaust system with two single-pass mufflers located ahead of the axle. The exhaust outlets will emerge under the side sills ahead of the rear wheel openings.”

Other features, standard on the Trans Am, included power front disc brakes with specially selected linings; 3.55:1 axle; rally suspension with front and rear sway bars and heavy-duty shocks; 15-inch wheels with raised white letter tires, E-60 in front, G-60 at the rear; a body-colored, racing type mirror; popup gas filler cap; and a collapsible “Shrunken Skin” spare tire. The fiberglass hood had a special fresh-air intake scoop and was held in place by competition-type hood pins; and on the rear deck there was a “duck tail” type, cross-deck spoiler.

The T/A was not available with the standard three-speed transmission. Either the four-speed manual gearbox or the TorqueFlite automatic was required, though technically both were extra-cost options. Other optional extras included a “chin whisker” front spoiler and quick-ratio steering, with or without power assist.

We do not know how many Challenger R/T’s were produced with the T/A package, but it is safe to presume that the numbers were quite limited, especially in view of the T/A’s very late introduction. It also goes without saying that the casualty rate was high, for this is the very sort of automobile that tends to be beaten to death by its owners.